Tonight we’re going to talk about loneliness at youth group, and how, in reality, we are never really alone. But at the same time, the feelings of loneliness are real in day to day life, and we should learn how to deal with them and be healed of them. We can also learn how to help others who are alone, and how to find them in the first place, because lonely people are everywhere, often right in front of us.

Dewey is going to share a short devotional he read the other day that he thinks is really good, and talks about how God is always there with us. I’ll probably come back and edit this post once I know what that’s about.

After that, we’re going to do a few activities centered around the theme. Not sure what order we’ll do these; maybe even go back and forth.

There are countless movies that center around the theme of loneliness. Whether it’s someone living the self-empowered life of “if it is to be, it’s up to me” and “succeeding” in it while isolating themselves from all others, or someone who simply has no one else, it’s a common theme. I’ve found several clips on WingClips, and hope to share some of them right there with the youth, and talk about what we can get from them, and how they compare or relate to circumstances we find ourselves in, or others we are around.

After receiving a call from his agent about free tickets, Lightening McQueen realizes that he has no friends to give them to. Themes: Loneliness, Friendship, Relationships, Self Realization, Priorities
I Am Legend – Not Alone 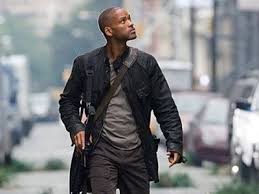 Despite there being no signs of life, Robert still sends out a signal to any possible remaining survivors, desperately seeking human interaction.
Gran Torino – Come Over

After Walt rescues both Sue and her brother Thao from street thugs, she invites him to her house for lunch.

Questions and Thoughts as clips are viewed…

For this part, I think we’ll divide them into “teams” of three to four people. Each time will review their story (movie, Bible Story, book plot, etc.) and then act it out for the rest of the group, trying to get them to guess the story without the use of words. Props would be encouraged, body language, moving around the room, etc…

A FedEx executive must transform himself physically and emotionally to survive a crash landing on a deserted island.
The Transfiguration
(Mark 14:32-42)
Jesus went with his disciples to a place called Gethsemane, and he told them, “Sit here while I pray.” Jesus took along Peter, James, and John. He was sad and troubled and 34told them, “I am so sad that I feel as if I am dying. Stay here and keep awake with me.” Jesus walked on a little way. Then he knelt down on the ground and prayed, “Father, if it is possible, don’t let this happen to me! Father, you can do anything. Don’t make me suffer by having me drink from this cup. But do what you want, and not what I want.” When Jesus came back and found the disciples sleeping, he said to Simon Peter, “Are you asleep? Can’t you stay awake for just one hour? Stay awake and pray that you won’t be tested. You want to do what is right, but you are weak.”Jesus went back and prayed the same prayer. But when he returned to the disciples, he found them sleeping again. They simply could not keep their eyes open, and they did not know what to say. When Jesus returned to the disciples the third time, he said, “Are you still sleeping and resting? Enough of that! The time has come for the Son of Man to be handed over to sinners. Get up! Let’s go. The one who will betray me is already here.
Job and His Three Friends
(Job 2:3-13)

Then the LORD asked, “What do you think of my servant Job? No one on earth is like him–he is a truly good person, who respects me and refuses to do evil. And he hasn’t changed, even though you persuaded me to destroy him for no reason.” Satan answered, “There’s no pain like your own. People will do anything to stay alive. Try striking Job’s own body with pain, and he will curse you to your face.” “All right!” the LORD replied. “Make Job suffer as much as you want, but just don’t kill him.” Satan left and caused painful sores to break out all over Job’s body–from head to toe.

Then Job sat on the ash-heap to show his sorrow. And while he was scraping his sores with a broken piece of pottery, his wife asked, “Why do you still trust God? Why don’t you curse him and die?” Job replied, “Don’t talk like a fool! If we accept blessings from God, we must accept trouble as well.” In all that happened, Job never once said anything against God.

Job’s Three Friends Eliphaz from Teman, Bildad from Shuah, and Zophar from Naamah were three of Job’s friends, and they heard about his troubles. So they agreed to visit Job and comfort him. When they came near enough to see Job, they could hardly recognize him. And in their great sorrow, they tore their clothes, then sprinkled dust on their heads and cried bitterly. For seven days and nights, they sat silently on the ground beside him, because they realized what terrible pain he was in.

After all is said and done, wrap up with the reminder from the opening devotional that we never have to be truly alone. However, until we meet Jesus in a personal way, there will always be that “hole” that can only be filled by Him. What are some of the things we try to fill it with? Friends? Family? Drugs? Fun? How can we point out to ourselves, and to our friends, that none of these will really ever last or fill that hole?

Jesus said, as recorded in Luke 4:

“The Spirit of the Lord is on me,
because he has anointed me
to preach good news to the poor.
He has sent me to proclaim freedom for the prisoners
and recovery of sight for the blind,
to release the oppressed,
to proclaim the year of the Lord’s favor.”