A few days ago, Mark Layton (our associate pastor) put a post on Facebook about testimonies for the revival services we’re having right now: “I am asking for volunteers to share a testimony about how God has delivered you from a difficult situation and made you ‘more than a conqueror.’” I’ve been through my share of spiritual ups and downs in my life, and sure, some of them have felt like victories… but “more than a conqueror?” I wrote back and said “I find that some of my best of days are simply battlefield victories and skirmish triumphs.” When I think of conquerors, I think of people like Brian Jennings, our guest speaker, referred to yesterday. Missionaries who give their lives to their work and don’t live to see the results of their labors. Martyrs who die for their faith. People that really give up something valuable, you know? 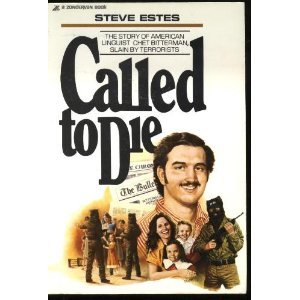 People like this guy – Chet Bitterman. Not only does he have a cool name, but he also had my dream job when I was in college. He was a Bible Translator working for an organization called Wycliffe. This organization has translated the Bible into over 700 different languages, and is in the middle of 1,500 translation projects right now.  All those thousands of people groups Brian was talking about yesterday? Wycliffe has given millions of people God’s word, in their own tongue. This guy was ONE OF THOSE GUYS. And not only was he a cool guy with an awesome name and an outstanding job, but he gave his life serving where he loved. In fact, it was on my birthday that he was abducted by Columbian terrorists, held for ransom, and eventually killed.

Here’s what someone wrote about this man and the book written about him: “Chet Bitterman is the All-American boy. He has a great sense of humor, a strong work ethic, the ability to love deeply, and a strong dedication to his faith. However, his biggest asset is his heart. Chet Bitterman is a giver. He wants to help others and finds himself in Colombia with his wife and two young children. Called to Die is a tragic book. It is such a pity that a fine young man who posed no threat to anyone and is in Colombia to help the Indians is killed. This book is a tribute to Chet Bitterman. He will never be forgotten.”

Tragedy? That guy sounds more like a heroic tale to me. Now THAT is a conqueror. Right? That’s the kind of guy I’d love to be.

I spent quite a few years trying to be that kind of conqueror. Whether it was through hard work in high school that got me to a top 10 list, getting a college degree in Bible with minors in Greek and missions, or starting off my career with a good paying job that gave me freedom to explore my dreams… I was on what I felt was the fast track to being the person God wanted me to be… except, come to find out, that’s not the kind of heroric role God was asking me to play.

So instead of becoming the person God wanted me to be, I fell into trying to be the person I thought God wanted me to be – which was bad in two ways. First, it was under my own strength. That “trying” to be someone I wasn’t made to be. Second, I elevated the mental image of the person I “thought” would please God. I had a picture in my mind of what a conqueror would look like, and I was all about becoming that type of person.

As Brian spoke about on Sunday morning, that was nothing more than idolatry. I was worshiping the role I wanted to play in the kingdom instead of the King Himself. It led me to constant feelings of disappointment and inadequacy, which led me to even deeper and darker attempts to find comfort and acceptance in everything from drivenness with my work to pornography to what could essentially be called emotional blackmail. I was anything BUT a conqueror.

When I was at the bottom of my rope, I don’t even know what was keeping me hanging but prayer, a few friends that cared about me and not their own reputations, and God’s grace, I was rescued. Through counseling, more prayer, more friends, and more grace, I realized that not only would God restore me to a role of a normal Christian, but he could re-make me into exactly what HE wants me to be. Even after I failed Him, miserably.  I truly believe that this broken part of my life represented the level of brokenness I had to come to until I could let God truly make me new.

I’m not ‘there” yet. I hope I don’t get “there” until I reach Heaven and finally come to understand true Son-ship and true Father-hood for what they really are. Sure, I want to be known as a good and faithful servant. Sure, I want to be involved in changing lives, even right here and now. But I’m finally discovering that it’s not the feelings of accomplishment that mean you’re more than a conquerer. It’s the day-to-day obedience of simply doing what God has asked you to do, right then and there. SIMPLY OBEY has come to be my reminder phrase. When I’m lost: Simply Obey. When I’m confused: Simply Obey. When I’m excited and what looks like awesome opportunities in the far off future: Simply Obey, right here and right now.

And you know what? It’s kind of coming full circle for me, now that I look back on it. You may know of my love for the Daily Audio Bible podcast. I love it first of all for what it’s done in my life, and also for what I’ve seen it do for countless others. It’s brought us back into a daily relationship with our Father, with our Creator, with the Savior of our Hearts.

And you know what I get to do!? I manage the 10 servers that spread the spoken Word of God across the globe to tens of thousands of people every day. I help take the gospel to places it’s never been before – to IPhones in India, to Blackberries in China, and to MP3 players in the Middle East… all across the world in languages I’ll never learn.

Am I more than a conqueror? That’s not the point. But my King is. And I serve at his pleasure.